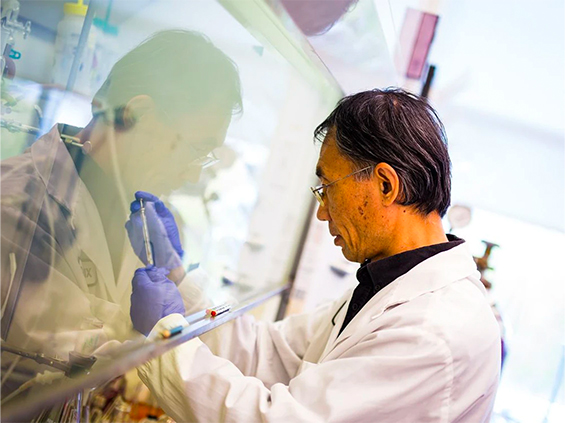 Handout photo of a scientist working in a lab at Vancouver-based Acuitas Therapeutics. Pfizer-BioNTech announced last week that the vaccine developed with Acuitas is 90 per cent effective against COVID-19 in human trials. PHOTO BY DAVID MADDEN PHOTOGRAPHY /PNG

For some firms, it became apparent early on that they were already doing research that could be applied to create COVID-19 vaccines and treatments.

In January, Vancouver-headquartered BetterLife Pharma was in the process of setting up clinical trials of an interferon treatment for human papilloma virus when that kind of research began grinding to a halt due to COVID-19 restrictions.

Company researchers, however, realized almost simultaneously that the anti-viral treatment they had spent three years developing for this specific use had potential for dealing with COVID-19, said CEO Ahmad Daroudian.

“Our scientists and our chief medical officer and clinical guru quickly alerted me that we should look at this,” he added.

Fast-forward to late November and BetterLife is one of the B.C. companies that has pivoted its research to COVID-19, which has resulted, in recent weeks, in major developments in vaccines and other treatments.

“I’ve been in the pharma business for about 30 years with various different parts of it,” said Daroudian, “(and) I have never seen a mobilization like this in the biotech world in a global effort.”

For BetterLife, a study in February led by Canadian researcher Eleanor Fish in Wuhan, China, that showed promise for interferons in treating COVID-19 emboldened Daroudian’s team, who went full-speed at reformulating its discovery, with an incredible level of co-operation wherever they turned.

“Definitely people are more open to collaborate,” Daroudian said, whether it’s on the clinical side opening doors for research and trials or on the regulatory side with expedited approvals considering the dire implications of COVID-19.

Submissions to Health Canada and the U.S. Food and Drug Administration that usually take 45-to-60 days for a turnaround can take as few as four or five days, Daroudian said, and “if they can make it easier for you to advance your program, they do whatever they can.”

As surprising as it seems to go from just learning about COVID-19 barely a year ago to the promise of vaccines and treatments by the end of the year, the speed of such developments is also a testament to the work a lot of local companies were already doing, said Wendy Hurlburt, CEO of the industry group LifeSciences B.C.

“Certainly COVID-19 created an impetus to probably enter (research) more on the world-stage level,” Hurlburt said,” but we should always remember that it’s not like everybody started working on this stuff in January.

“It’s because we had it at the ready, because we’ve been investing in research and science for as long as we have.”

And for that, Hurlburt said B.C. firms are perhaps over-represented in some of the global developments, which she described in industry terms as “over-indexing.”

“The sector did sort of get lit on fire (by COVID-19),” Hurlburt said, “but what really got lit on fire was this amazing collaboration.”

Between government support for research, contributions from big pharmaceutical firms investing in promising discoveries and that streamlined regulatory attention, researchers have made a lot of progress quickly.

“I think that is the learning that, hopefully, we can take forward,” Hurlburt said.

A provincial government survey published in June, with the co-operation of LifeSciences B.C. and Global Affairs Canada, estimated there were 1,120 companies in the province’s life-sciences sector that employed more than 17,000 people, based on 2018 data. Hurlburt said the sector has added about 1,000 jobs since then, with the needs of COVID-19 no doubt helping support life sciences during a downturn in other areas of the economy

Recent developments have included emergency approval by the U.S. Food and Drug Administration of an antibody discovery by Vancouver-headquartered AbCellera, in partnership with pharmaceutical giant Eli Lilly, and the clinical-trial success of a vaccine candidate from Pfizer-BioNTech SE that uses the delivery technology of local firm Acuitas Therapeutics.

However, even the full-speed-ahead approach to COVID-19 research hasn’t escaped the challenges of workplace safety related to preventing virus spread and restrictions on travel.

“I was a very good customer of Air Canada in 2019,” said Daroudian at BetterLife, but hasn’t set foot on an airplane since March. Executives can manage strategic planning and co-ordinating with outside groups doing lab work for the firm via Zoom calls, Daroudian said, but it’s not the same.

“That’s the hardest part, not being able to have the team together in one room,” Daroudian said. “There’s something to said about being in the same room with a whiteboard.”

“Obviously we have the challenge of needing to protect our employees from potential infection with COVID-19,” while contributing to vaccine discoveries for COVID-19.

And like other researchers, Madden said in January Acuitas was in the middle of other research, they were contributing their messenger RNA technology to a rabies vaccine, when they realized they had something to contribute to the COVID-19 effort.

Madden said researchers were keenly aware that vaccines would be needed to deal with COVID-19 as soon as the seriousness of the disease made itself apparent.

“Certainly in late January, early February, we were in discussions with BioNTech to develop a vaccine against COVID-19,” Madden said. “In fact we flew to Germany (in February) to meet with German regulatory authorities, together with BioNTech, to discuss how quickly we could move into clinical trials using a messenger RNA vaccine.

“I’ve been working in this sector a long time and I’ve never seen any therapeutic developed as rapidly as the vaccines against COVID-19,” Madden said. “It’s been remarkable.”